Home of Ondel-ondel in Jakarta

Amidst the unstoppable development in Jakarta, there is a small area near Pasar Gaplok (Gaplok Market) at Kramat Pulo in Central Jakarta that is home to ondel-ondel, the icon of Jakarta. Ondel-ondel is a giant effigy from Betawi (the original tribe of Jakarta) that has become the symbol of Betawi culture in the capital city. The huge doll can fit a man who will control it from the inside.

On my recent visit to Pasar Gaplok, I saw how the local people make ondel-ondel, not only to preserve their Betawi culture but also to earn a living. The residents of Kramat Pulo very much depend on ondel-ondel. For years, they have been making barongan – a different name for ondel-ondel – for artistic performances. They also often wear the doll to busk on the streets or around the housing complex in Jakarta.

In the old days, ondel-ondel used to be called barongan. The name changed when Betawi legendary artist Benyamin Sueb sang the “Ondel-ondel” song (a Betawi traditional song about the giant dolls parade) at a Betawi cultural event.

Some said ondel-ondel means “to swing” which is derived from their movements – an ondel-ondel looks like it is swinging from side to side every time it moves.

It is easy to fi nd ondel-ondel craftsmen in Pasar Goplok. Almost everyone at this small area can take you to an ondel-ondel maker who will be ready to make the kind of ondel-ondel you want. There are three groups of ondel-ondel makers in Kramat Pulo; they all live and work along the small river on Jalan Kembang Pacar which is located less than 200 meters from the Kramat District Office. The craftsmen begin to work in the morning until before 12 p.m.

During my visit, I met Dede Sulaiman, one of the craftsmen in the area. He explained everything I needed to know about making an ondel-ondel – for a start, he told me that it takes four people to make one ondel-ondel. They use bamboos to construct the body of the effigies and a hula hoop to bind the bamboos together. Ondel-ondel dolls are huge – the tallest one can reach up to two meters.

The most artistic, yet difficult, process is making the kedok which is the mask or the face of the ondel-ondel. Ondel-ondel is usually a pair of a male and a female doll, so the kedok is designed to resemble either a man’s face or a woman’s face. The face of the male ondel- ondel is usually painted in red with a mustache, while the female is painted in white and has a friendlier look. The kedok is made of paper pulp and cement, but now the craftsmen make improvements by using some chemical ingredients and fiberglass.

When the dolls are ready, it is time to dress them. The dolls are usually dressed in Betawi traditional clothes. The three ondel-ondel maker groups in Kramat Pulo receive clothes and other ornaments for their ondel-ondel from other residents in the area.

The craftsmen in Kramat Pulo also produce ondel-ondel in a smaller size, only 30 centimeters tall. These small-sized ondel-ondel dolls are mostly popular for souvenirs that are made to order. People usually request ondel-ondel for display or performances on special events where Betawi traditional songs will also be played. 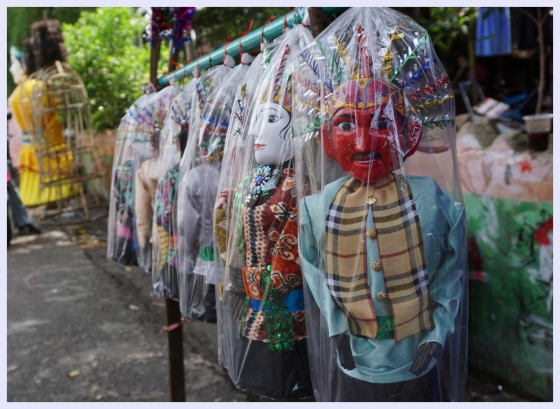 These huge dolls can be found around Jakarta’s administrative office, Betawi cultural centers, and other tourist destinations in Jakarta.

The dolls are also usually paraded along the road around residences. Ondel-ondel is believed to protect humans from bad spirit or bad luck, and that’s why ondel-ondel is often seen at events that are related to Betawi culture, such as a traditional Betawi wedding, a circumcision celebration or a house-warming party.

Ondel-ondel is not only performed at special events. According to Dede, the people in his neighborhood sometimes go busking on the streets or around a housing complex. They usually go by trucks to the southern part of Jakarta, such as Kebayoran Lama or even further to Tangerang or Tangerang Selatan to perform ondel-ondel every day from 12 p.m. and go back home to Kramat Pulo at 12 a.m.

This post has been published originally on Bali & Beyond Magazine on March 2017 edition.

2 comments on “Home of Ondel-ondel in Jakarta”