“Let’s go there?” a friend sent a short message on a group messenger. Attached, two photos she captured from an Instagram page. Two photos of a girl standing between the yellow flowers blooming and green bushes with the touch of sunset color.

“Nyang-nyang beach! Beautiful, isn’t it?” she continued the conversation.

A secret garden in a hidden beach. That was our first thought about Nyang-nyang beach from the photos we saw. Before we came to the beach.

For those who love surfing, Uluwatu is one of Bali’s most popular places to conquer the waves. It is also blessed with breathtaking cliffs and beach scenery in the far south of the island. But if you are looking for a quieter beach to relax and take it easy, Nyang-nyang Beach in Pecatu is a great option either for surfing or simply sunbathing in the Uluwatu area.

Though Nyang-nyang Beach is one of the most secluded beaches in Bali, you can easily find it on GPS. The track to the location from there, though, is tricky to find. Follow the route straight to Uluwatu Luhur Temple. From Uluwatu, before reaching the temple, you will find Jl. Batu Nunggalan. Turn left and follow the road until you reach a villa’s parking lot. 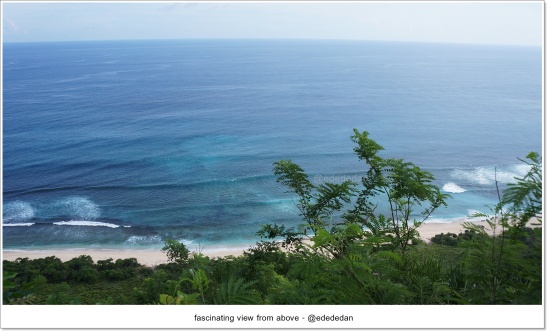 The less-crowded Nyang-nyang beach actually offers a quite adventurous activity – similar to climbing a mountain. During my recent visit to the beach, my first time, I was quite surprised by some of the things that I found. From the parking lot, the trek leading to the beach – as indicated by a signboard saying “to the beach” – offers a fascinating view of the Indian Ocean from the edge of the cliff.

Walking down from the cliff’s edge to the beach would take less than an hour, but the rather precipitous trek between the trees might slow you down a bit. Make sure you wear proper shoes for safety.

“We got the sensation of trekking a mountain as well as playing around the beach,” a friend said during our trek. 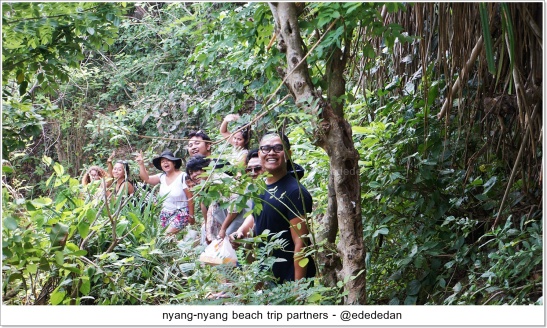 As I approached the beach, I came across an unexpected and beautiful wild garden adorned with green bushes and plants and blooming yellow flowers among green leaves. My sense of beauty has rarely been so aroused as by this moment of boundless sky and sheer cliff, greenery punctuated with vibrant yellow. 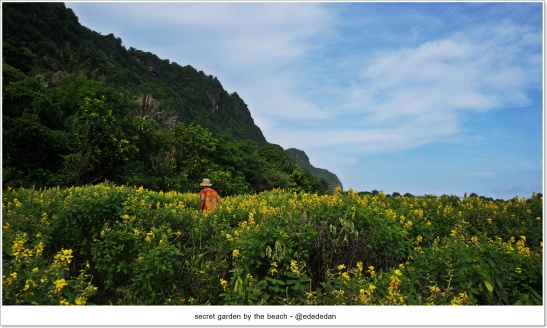 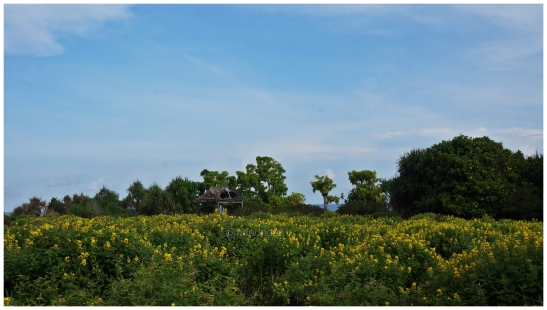 I reached the beach; I fell on my knees on the pristine white sand. After the wild garden, I did not expect too much for the beach. But the beach was way too beautiful, like a private beach, only me, my friends and another small group seen there.

I was satisfied enough with the view of the garden and the beach. But Nyang-nyang gave me another surprise.

Wandering ever westward, my delight was again inflamed by two parts of what was once one ship, once the vessel of a fisherman, the letters inscribed on its dismal bow recalling the misty coasts of far-off China. My third eye lost no time in recording this ghost of labor for posterity! 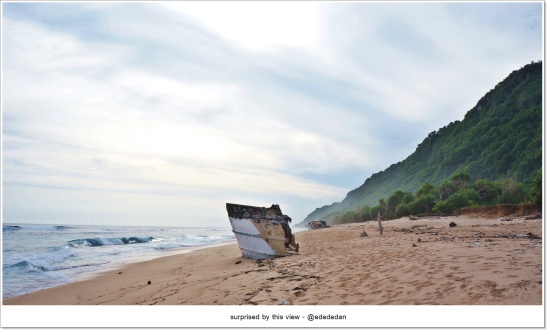 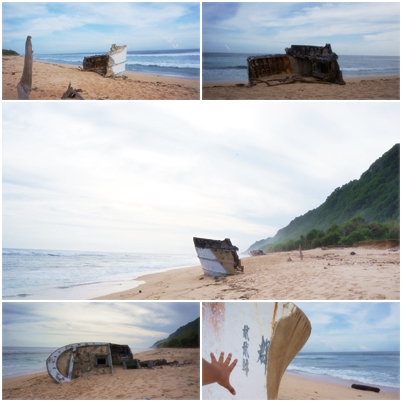 I yearned to become one with the coming sunset, but was worried about what might loom in the darkening cliffs. Back, up I went, following the narrow path to the parking lot, vowing soon to return…